Badminton will be restarting in October.  Anne and John Dubbury have agreed to take it on.  Further details regarding the date and venue, although it is likely to be at the Pearson Centre, will be available soon.  If anyone is interested please contacthelen.stewart1@btinternet.com and she will pass on your names and contact details.  Our thanks go to Anne and John.

Badminton sessions will resume on Wednesday 18th Sept at the Pearson Centre Beeston near Beeston Library from 1015 a.m. to 1130 a.m. Cost will be approximately £3 depending on numbers playing. Racquets and shuttles are provided free and we use the large sports hall with three courts. Sessions have been increased to twice monthly. At present we have 12 members but have room for more so if you are interested in joining why not come along to the next session. 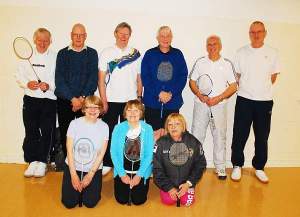 The group meets the second and fourth Wednesday of the month from 10.15am to 11.30am.

Rackets and shuttles are provided and the players range in ability with emphasis on fun and enjoyment in actual playing.

Cost is approx £3 per session dependent on numbers attending.

We meet every two weeks on Wednesdays at the Pearson Centre behind Beeston Library at 10 15 am to start at 10.30 and aim to finish by 11.30 am. A Session cost £3 which includes hire of rackets, shuttlecocks and courts. It is a splendid sports hall and we have all three courts to ourselves with good changing facilities for both male and female. If you are interested, contact me for more details

We now have a good group and next Wednesday 30 January is our next session starting at 10.15am at the Pearson Centre.

I have now bought a new set of plastic shuttles and as we have now a good range of players – the better players will for part of the session assist those keen learners with some added skills. To end the session we will have an actual match up to twenty one points which is the standard match practice and I will ask for a volunteer to be scorer. Some of you are still confused with the correct scoring method.

Towards the end of April/May we could have a round robin tournament with players names drawn from Jane’s hat. We would have the pairs drawn at random but with some seeding – ie the better players would be playing with others not quite so good – it would create a slightly competitive element.

I have also heard that the Long Eaton and Ilkeston U3A Group may be forming a Badminton Group in the the future so that would be fun to play them but that may be some time in the future!

We can discuss all this on Wednesday by which time all this snow will hopefully be a distant memory!

Happy New Year to you all !

At our last meeting we decided to meet every two weeks at the Pearson Centre which is at the back of Beeston Library at 1015 am to start at 1030. We aim to be off the courts by 1130am.

Session cost £3 which I will collect at end of Session. This just covers the cost of hire from the centre. It also includes hire of rackets and shuttlecocks. for those who have not yet attended it is a splendid sports hall and we have all three courts to ourselves with good changing facilities for both male and female. If just 12 members attend it means continual play for one hour which some of you find quite tiring but enjoyable!

The dates for the sessions are the following so put them in your new diaries. 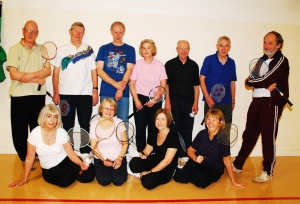 The Badminton group has been formed for two months and meets at the Pearson Centre close to Beeston Library every second Wednesday of the month.  Rackets and Shuttles are provided free and we meet from 10.15am to 11.30am. We have access to three courts so play is continuous and the facilities are excellent.  At present the group is full with a waiting list but if you are still interested in joining it may be possible to fit you in if you contact me prior to the meeting date.  Cost for each session is just £3 per person.  The next session is Wednesday 12th December 201

There will also be an additional date each month in the New Year which the group has yet to determine !

We had a successful launch this morning at the Pearson Centre! It is an excellent venue with a new sports hall all to ourselves with three badminton courts plus free use of rackets and shuttles. As I envisaged the standards of play varied with some very good players and others improved with practice. They enjoyed the session from 1015 am to 1130am and the next two meetings this term will be on Wed 14th Nov and Wed 12th Dec at the same times.
We had ten members this morning so that they were on court all the time. In the new year they are keen to have two sessions per month and this is likely to happen as the courts are free at this time. Ideally we need about two more players but I am very happy with the situation at present….above all they enjoyed it and that was my main purpose in the exercise.
Douglas’

Have finally finalised the formation of our badminton group we have a total of 18 names of interested members.

The venue has been changed to the Pearson Centre in central Beeston, 2 Nuart Road Beeston (tel 0115 925 4112) which is very close to the library in Beeston. There is plenty of parking around the area and the centre itself has a small car park.

We will have a purpose built sports Hall to ourselves with three full size badminton courts and shuttlecocks and rackets will be provided free. If however you have a racket, please bring your own. There are both male and female changing rooms and there is provision for refreshments.

The cost will just be approx £2 to £3 dependent on numbers on the day.
We can also extend these hours and have the sessions twice per month if you so desire !

Most of the group are on email and I have contacted others with just phone numbers so that no one is excluded.

If you cannot come on this particular date as above, just give me a ring  on 0115 925 2010 and you may join the group later. Basically it will run as previously planned meeting on every second Wednesday of the month.